The value spectrum is a comparison of your company's current market value and the theoretical maximum value of your business.

Written by Matthew Lawver
Updated over a week ago

The current market value of your business is the value we conclude based on our in-depth analysis of your company. The Theoretical Maximum Value ("TMV") is based upon your company's earnings multiplied by a "theoretical maximum multiple". The TMV represents the potential value of the company were it performing at "best in class." 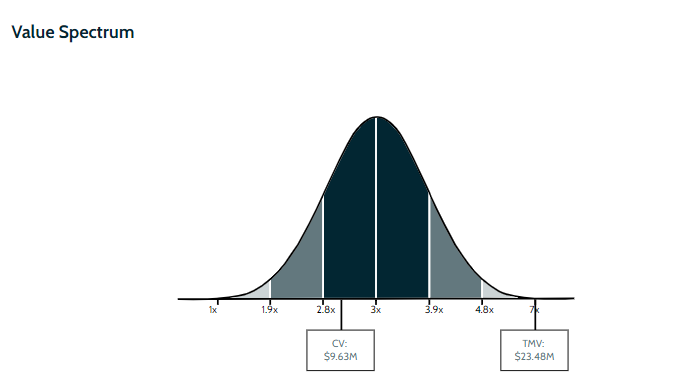 In most cases, value for any given company participating in a given industry can be represented by a normal distribution. That is, most companies perform near the mean.... with only a small number performing at the upper end of the spectrum. In fact, in a normal distribution, approximately 68% of companies fall within 1 standard deviation of the mean. Want to be best-in-class? You're going to need to be in the 2nd or 3rd deviation. Said another way, is your company performing better than 95% or 99% (respectively) of industry participants?

Value Scout demonstrates the difference between your company's current market value and theoretical maximum value through the use of a bell curve. In statistics, a bell curve represents the distribution of different data points in reference to their distance from the mean or average value. Value Scout applies this concept to demonstrate the company's current market value versus its highest potential.

TMV - Can a Company be worth More than TMV?

Short answer: yes, but not right now. The best-in-class company is likely operating at margins that are better than the subject company, has a higher growth rate, and a lower risk profile. If your company starts to emulate the best-in-class company and can grow earnings, there is every reason to think that the company can eventually be worth more than today's TMV.

🏅 Pro tip: This is a great conversation to have with your Value Creation Advisor!

Did this answer your question?